Max – a thought experiment: Could AI run the economy better than markets?

Cascade Institute Scientific Advisory Board member, Dan and Ran Emmett Professor of Environmental Law and Faculty co-Director at the Emmett Institute on Climate and the Environment at the UCLA School of Law

One of the fundamental critiques against twentieth century experiments in central economic planning, and the main reason for their failures, was the inability of human-directed planning systems to manage the data gathering, analysis, computation, and control necessary to direct the vast complexity of production, allocation, and exchange decisions that make up a modern economy. Rapid recent advances in AI, data, and related technological capabilities have re-opened that old question, and provoked vigorous speculation about the feasibility, benefits, and threats of an AI-directed economy. This paper presents a thought experiment about how this might work, based on assuming a powerful AI agent (whimsically named “Max”) with no binding computational or algorithmic limits on its (his) ability to do the task. The paper’s novel contribution is to make this hitherto under-specified question more concrete and specific. It reasons concretely through how such a system might work under explicit assumptions about contextual conditions; what benefits it might offer relative to present market and mixed-market arrangements; what novel requirements or constraints it would present; what threats and challenges it would pose, and how it inflects long-standing understandings of foundational questions about state, society, and human liberty.

As with smaller-scale regulatory interventions, the concrete implementation of comprehensive central planning can be abstracted as intervening via controlling either quantities or prices. The paper argues that quantity-based approaches would be fundamentally impaired by problems of principal-agent relations and incentives, which hobbled historical planning systems and would persist under arbitrary computational advances. Price-based approaches, as proposed by Oskar Lange, do not necessarily suffer from the same disabilities. More promising than either, however, would be a variant in which Max manages a comprehensive system of price modifications added to emergent market outcomes, equivalent to a comprehensive economy-wide system of Pigovian taxes and subsidies. Such a system, “Pigovian Max,” could in principle realize the information efficiency benefits and liberty interests of decentralized market outcomes, while also comprehensively correcting externalities and controlling inefficient concentration of market power and associated rent-seeking behavior. It could also, under certain additional assumptions, offer the prospect of taxation without deadweight loss, by taking all taxes from inframarginal rents.

Having outlined the basic approach and these potential benefits, the paper discusses several challenges and potential risks presented by such a system. These include Max’s need for data and the potential costs of providing it; the granularity or aggregation of Max’s determinations; the problem of maintaining variety and innovation in an economy directed by Max; the implications of Max for the welfare of human workers, the meaning and extent of property rights, and associated liberty interests; the definition of social welfare that determines Max’s objective function, its compatibility with democratic control, and the resultant stability of the boundary between the state and the economy; and finally, the relationship of Max to AI-enabled trends already underway, with implications for the feasibility of Max being developed and adopted, and the associated risks. In view of the depth and difficulty of these questions, the discussion of each is necessarily preliminary and speculative. 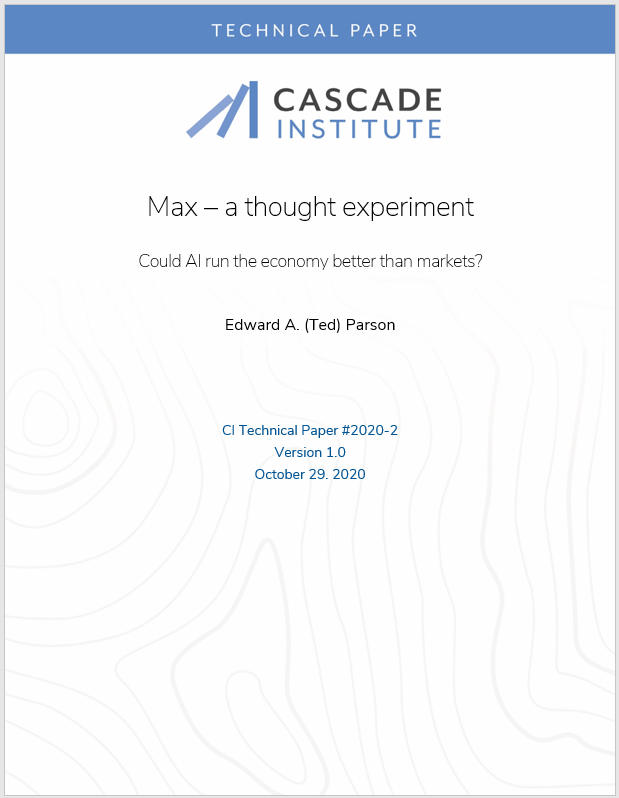