Over a period of roughly four weeks, from early March to early April 2020, countries around the world experienced rapid and widespread changes in attitudes and behaviours toward social distancing practices, in response to the COVID-19 pandemic. (In Canada, the change occurred in about a week, from March 11 to March 18.) These changes were particularly impressive in liberal democracies that did not implement harsh penalties to enforce compliance with social distancing rules, but instead largely relied on the strategic communication of government guidelines and the voluntary adoption of “encouraged” social distancing practices.

Largescale behavioural change on this scale, without the threat of harsh sanctions for non-compliance, not only requires the effective communication of public health information but also the emergence and rapid dissemination of new social norms. It illustrates the power of emotionally charged ideas and moral persuasion, as well as the capacity of seemingly intractable belief systems to rapidly shift during a crisis. The recent social distancing norm cascade, as it is called here, also offers an unprecedented opportunity to analyze shifting worldviews in real-time, an opportunity that may reveal important lessons for encouraging other socially beneficial norm cascades around climate action and the zero-carbon energy transformation.

This Technical Paper analyzes the rapid and widespread changes in attitudes and behaviours toward social distancing practices during the COVID-19 pandemic. While most of the existing literature on norm cascades focuses on the central role of incentives to explain the spread of attitudinal and behavioural changes within a social system, here, I focus on the underexamined role of belief systems.

Using a belief system modeling method called Cognitive-Affective Mapping, this analysis compares the belief systems of young, relatively healthy people heeding government social distancing guidelines (whom I call “Good social distancers”) with three archetypal belief systems of people who have been most resistant to behavioural change, labelled the “Misinformed,” the “Consequentialist-individualist,” and the “Consequentialist-collectivist.” This analysis reveals the importance of targeting resistant groups with a combination of scientific messaging and moral persuasion.

Specifically, many individuals who are reluctant to practice aggressive social distancing measures fixate on the immediate, personal costs of social distancing and lack a sense of broader community responsibility. Effective messaging, for these individuals, emphasizes medium-to-long term impacts on the community and highlights the linkages between collective and personal well-being. Reluctant social distancers also tend to not make connections between the elevated risk posed to elderly and vulnerable people and their own relationships with family and friends. Messaging that prompts people to consider these relationships – even the elderly relatives of their friends – is a potentially effective strategy for shifting their assessment of the costs imposed by the outbreak relative to the narrow, personal costs of social distancing.

The paper also highlights how incentives and social network dynamics interact with belief systems to determine whether or not people act consistently with their underlying beliefs. Belief systems will only motivate pro-social behaviour in situations where the benefits of aligning one’s actions with one’s convictions exceeds the perceived social or reputational costs imposed by members of their social network. Therefore, messaging around social distancing is most effective when it comes from trusted, influential sources within one’s own social network. Governments now face the difficult task of trying to penetrate the social networks where these messages have had the least success and therefore should focus their efforts on influential, well-connected network “hubs” like celebrities, politicians, and religious leaders. 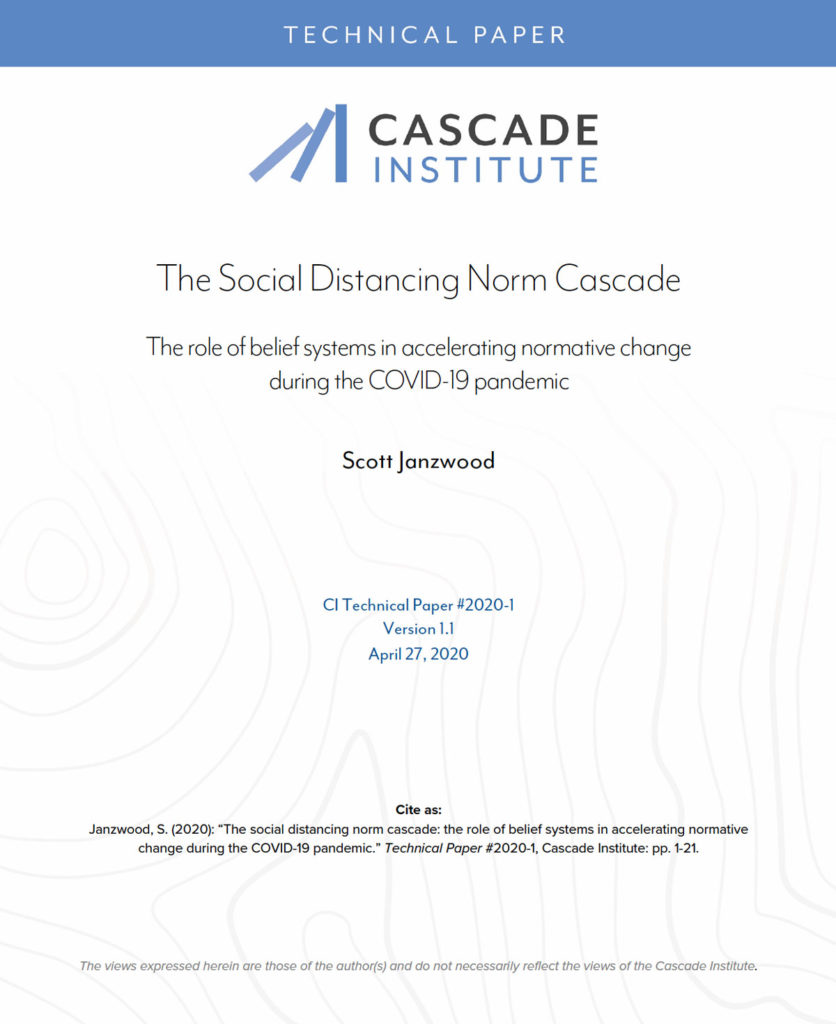