Michael Brown, a venture capitalist with long influence in the clean technology sector, is co-founder (with the Canadian Permafrost Association) and chair of the Permafrost Carbon Feedback Action Group, of which Duane Froese, University of Alberta professor and Canada Research Chair (Earth and Atmospheric Sciences), is a member.

The Version of Record of this op-ed has been published in: The Vancouver Sun 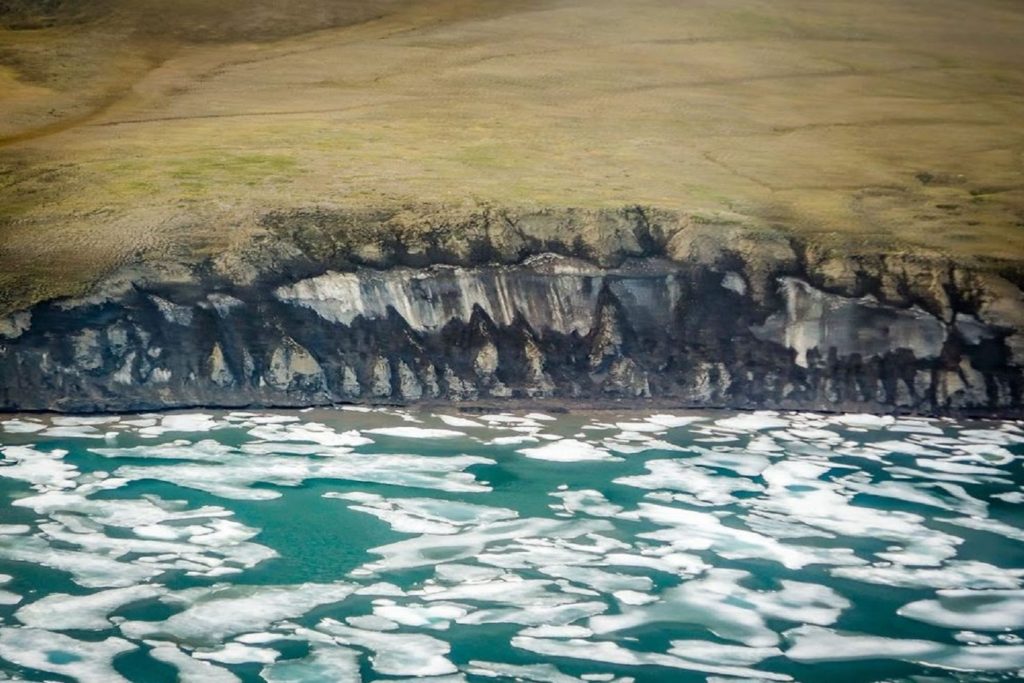 Image: The north coast of Banks Island shows exposed ice along the cliff face. This formation is being eroded by wave action abetted by higher temperatures and decreased sea ice.

Unconstrained, Canada’s permafrost could be releasing more carbon than is currently being generated by all human activities across the country. This raises three stark concerns and a pressing opportunity.

Among the too-few Canadians who give it much thought, there is a dangerous misconception that thawing permafrost is a local issue, safely ignored if you don’t live in northern Canada.

Certainly, permafrost thaw is a dramatic, disruptive, and super-expensive local issue. Much of Canada’s northern infrastructure was built on ground that everyone assumed was going to stay cold and stable “permanently.” But with climate change warming the north at more than twice the global rate, that ground is thawing — turning, in effect, from concrete to porridge. Once-solid ground is heaving and buckling, slumping down hills or sliding into the sea, undermining or destroying roads and airports, homes, public buildings, even pipelines.

The Northwest Territories Association of Communities estimates current levels of infrastructure damage at $1.2 billion to $1.6 billion — and that’s just in the N.W.T. (population 44,000) and doesn’t include impacts in Nunavut, Yukon and northern Quebec.

But there is another, even bigger permafrost issue — one that reaches every corner of the globe. In addition to providing a no-longer-reliable building foundation, permafrost also holds a staggering amount of carbon, the remnants of plants, animals, and microbes that lived and died in tundra and boreal ecosystems, and then accumulated in soils over thousands of years. This sequestered carbon is nearly double the carbon dioxide in the atmosphere, and nearly three times the carbon stored in all the forests on earth. As northern regions warm and ground thaws, this long-stored organic matter begins to decompose, releasing carbon dioxide and methane, an even-more-powerful greenhouse gas. Where permafrost used to be a carbon sink — a place that absorbed more carbon dioxide every year in plant material — there is increasing evidence that it has transitioned from a carbon sink to a net source of greenhouse gases to the atmosphere.

This is the permafrost carbon feedback: warming promotes thaw, which liberates greenhouse gases, which causes more warming. Unconstrained, Canada’s permafrost could be releasing more carbon than is currently being generated by all human activities across the country. At that point — in theory, at least — Canadians could stop generating greenhouse gases entirely and the problem would continue to get worse.

This raises three stark concerns, and a pressing opportunity:

First, too few people are aware that the permafrost carbon feedback is an issue.

Second, when they find out, many people are inclined to freak out — understandably. Global warming can already seem like an insurmountable problem. The idea that there may be dangerous tipping points in our future can lead some people to despair and inaction. (Certainly, the best time to have dealt with this issue was in the past, but the next-best time is now.)

Third, no government in the world is currently making permafrost carbon feedback-specific policy domestically or advocating for action through organizations such as the United Nations Framework Convention on Climate Change. That’s understandable, too. This is an incredibly complex problem, demanding cooperation across numerous jurisdictions — for many, it might still seem a bridge too far.

As well, because the affected territory is so vast (covering 25 per cent of the earth’s land mass) — and the science is still progressing — some argue that we should hold off taking action.

But, as the University of Toronto ethicist Kerry Bowman has pointed out, when a problem could be this devastating, the precautionary principle demands that we begin mitigating action even as we work to better understand the scale and timing of the threat. The COVID-19 pandemic has provided a sharp reminder of the truth of that lesson.

The writer James Baldwin also had something useful to say for situations such as this: “Not everything that is faced can be changed, but nothing can be changed until it is faced.”

Given the scale and distributed nature of the problem, there are, currently, no actual solutions. But there may be strategies that can buy us time while we move along the path to global decarbonization. These fall into three categories:

1. Options for limiting thaw in specific regions: for example, by solar radiation management (reflecting solar energy back into space).

2. Options for limiting greenhouse gas emissions locally and/or restoring the permafrost’s capacity to become a carbon sink: for example, by promoting the growth of plant matter that absorbs CO2, including grasses that reflect solar energy in the summer and (unlike trees) don’t insulate the ground from winter cold.

3. Methods by which to capture and sequester carbon dioxide or treat methane, reducing the risks of temperature increases over the whole earth.

Above all, we need a clearer understanding of the threat and a pathway on which to proceed. And that is the mission of the Permafrost Carbon Feedback Action Group, a privately funded organization allied with the Canadian Permafrost Association, and working (with the endorsement of Jonathan Wilkinson, minister of Environment and Climate Change Canada) to develop a PCF Intervention Roadmap. The idea is to create a playbook that supports advancements in science while also identifying, assessing, and prioritizing mechanisms for mitigating and/or adapting to permafrost thaw and carbon feedback. Such a roadmap would be useful to everyone from policymakers to investors.

As a first order of business, the PCFAG is convening a four-part dialogue, commencing March 4, featuring a series of international experts in science, policy, technology, and ethics, and which includes representatives of Indigenous people who are most at risk from the immediate effects of permafrost thaw. The list of leading-in-their-field delegates is already well over 100, with representatives from 14 countries, across the circumpolar region and around the world. (For more information on the dialogues, email: PCFActionGroup@gmail.com. To register for any of the dialogues, go to: bookwhen.com/pcf)

In a very literal way, permafrost has been the glue that has held the north together. The people of the north cannot ignore its decline — given the risk of permafrost carbon feedback, none of us can. The sooner we face it — the sooner we learn the lessons of science and reach out with support and mitigation measures for people of the north and for our circumpolar neighbours — the better our chance to ensure that PCF never pushes us past the point of no return.