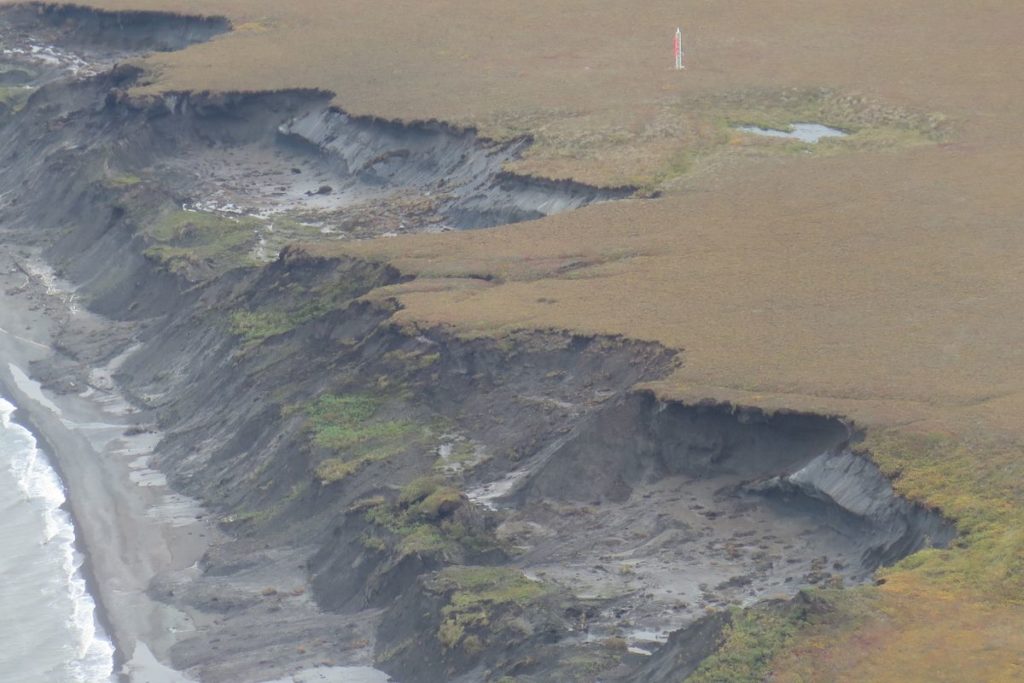 Image courtesy of the Geological Survey of Canada

Last summer, temperatures north of the Arctic Circle in Siberia approached 40 C. During the same months, wildfires of a size unprecedented in the historical record swept through Arctic and subarctic boreal forests and peat lands. And in September, the expanse of sea ice in the Arctic Ocean melted to the second-lowest area ever measured.

The Arctic is warming at more than twice the global rate. And this warming and the resulting wildfires are accelerating thaw of the North’s permafrost – the zones of perennially frozen soil, sediment and peat girdling the northern part of the globe.

This thaw matters to us because Canada is a permafrost nation. Almost half our land area lies within areas containing permafrost, and we’re second only to Russia in total amount. Permafrost thaw affects Indigenous communities, infrastructure and resource extraction across the North. By changing the landscape’s surface through the melting of ground ice, it affects ground strength, roads, pipelines, powerlines and buildings. But permafrost thaw matters, too, because of what it means for climate change.

The underlying concern is what climate scientists call “carbon-cycle positive feedbacks.” The term sounds arcane, but the concept is quite simple – and one that needs to be more widely understood, because a positive feedback involving Earth’s permafrost regions could determine whether humanity gets its climate problem under control.

Positive feedbacks happen when a change in one part of a system – whether the planet’s climate, a national economy or even a human brain – causes a sequence of knock-on changes that reinforces the original change. Many people mistakenly think that “positive” means beneficial. But a positive feedback can be either good or bad in terms of the outcome it produces.

When it comes to climate change, scientists pay particular attention to positive feedbacks involving Earth’s carbon cycle. In these cases, emissions of carbon from human behaviour cause warming, that in turn stimulates release of carbon from non-human sources, which leads to more warming. For example, as the planet’s surface temperatures have shot upward over the past decade, wildfires from Australia to British Columbia to Siberia have released staggering quantities of carbon, enough to appreciably boost levels of heat-trapping carbon dioxide in the atmosphere.

Put simply, when carbon-cycle positive feedbacks kick in, the planet’s warming becomes its own cause – and that’s definitely not beneficial. Indeed, alarm bells should be sounding, but they’re not.

Permafrost contains enormous quantities of ancient carbon in the form of frozen plants, animals and microbes that accumulated over tens of thousands of years – a total amount about twice that in Earth’s atmosphere. As this organic matter thaws, it decomposes, releasing its carbon into the air as either carbon dioxide or methane. Thawing can happen gradually, as heat warms the surface downwards – or suddenly, as ground with large volumes of ice collapses, forming lakes and landslides on hillslopes exposing underlying ground ice.

Already, emissions from permafrost are estimated at between 0.3 and 0.6 billion tonnes of carbon each year, roughly equivalent to 7 per cent of the world’s total carbon emissions from burning coal, oil and natural gas. Without aggressive climate policies, and considering only gradual, top-down thaw, by the year 2100 cumulative permafrost emissions could reach 150 billion tonnes of carbon – nearly half the world’s remaining carbon budget if humanity wants to have a good shot at keeping warming under 2 C, which is the limit set in international climate agreements.

Potential emissions from thawing permafrost aren’t adequately incorporated into either the climate models that inform current climate negotiations, or into recently updated national commitments for emission cuts made under the Paris Agreement. In a just-published paper, seven leading experts on permafrost and climate change, including Susan Natali of the Woodwell Climate Research Center and John Holdren of Harvard University, are unequivocal: “The carbon budgets that informed these commitments were incomplete, as they do not fully account for Arctic feedbacks.” There’s “an urgent need,” these scientists say, to incorporate the latest data on permafrost carbon emissions into international negotiations for a more robust response to the climate crisis.

No country has a strategy to deal with permafrost feedback. But Canada recently took a step forward by holding four Permafrost Carbon Feedback Dialogues, convened by a private-sector team and sponsored by the Canadian Permafrost Association, with participation from Jonathan Wilkinson, the federal Minister of Environment and Climate Change. These dialogues brought together Indigenous leaders and several hundred experts from around the world to review the state of science and the complex technical, policy, cultural and ethical challenges arising from permafrost thaw.

Yet there’s much more we can do. Canada can set up a monitoring network and remote sensing technologies that identify thaw mechanisms and accurately measure the amount of carbon being released – something no country is currently undertaking at scale. Partnering with Northern and Indigenous communities, we can pioneer research to see whether thawing might be slowed or whether regions might be converted from net carbon sources to net sinks, meaning they would absorb more carbon than they release. And internationally, we can put permafrost carbon feedback on the agenda of the COP26 climate meeting this fall in Glasgow, and pull together the circumpolar countries to work collaboratively on this issue.

Permafrost may seem tucked away in remote northern regions. But what happens in the Arctic doesn’t stay in the Arctic. Changes in the world’s permafrost should matter to everyone because they could determine humanity’s future. Canada is a permafrost nation, so it’s time for us to take the lead.