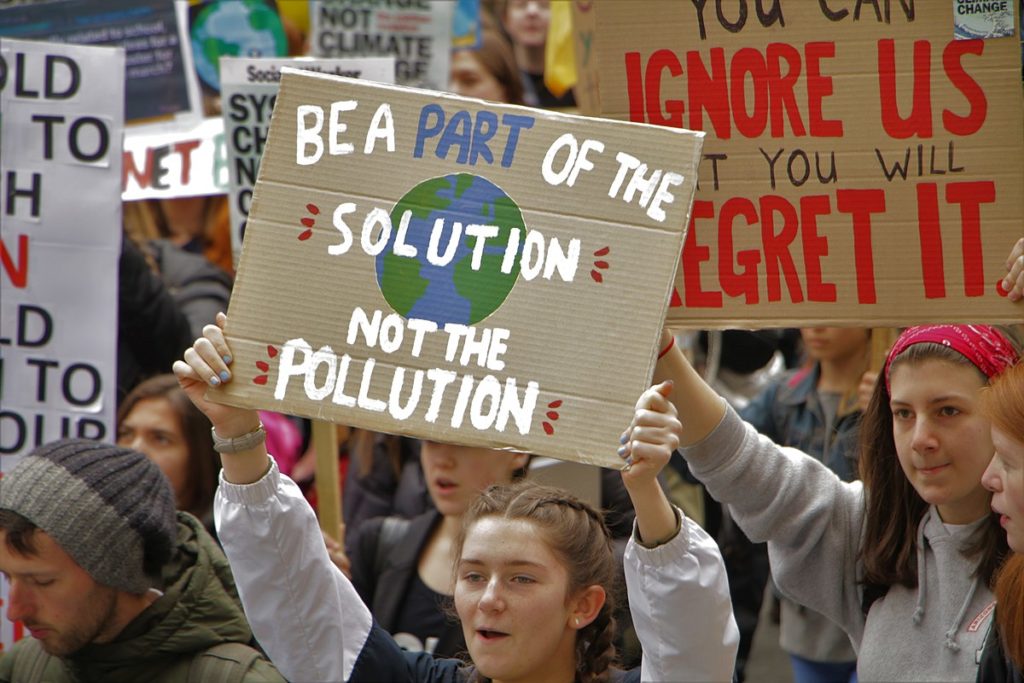 Almost exactly two years ago, 500,000 people marched through the streets of downtown Montreal, calling for action on climate change—most of them under the age of 30. Mobilized by youth-led organizations such as Fridays for Future, the message was loud and clear: young people are angry about the lack of action being taken to address the climate crisis. More importantly, the climate marches showed that youth are tired of talk—they want action.

But mere months after this unprecedented mobilization of the youth climate movement, attention quickly shifted to infection rates and mask mandates. Despite the lack of mainstream media coverage over the last year and a half, young Canadians have been busy experimenting with digital tactics—including tweet storms and digital strikes—and are continuing to put pressure on politicians, companies, financial institutions, and other key actors.

Young Canadians have unique capacities and talents to accelerate the net-zero transition. For youth, the stakes of the climate crisis are personal—and existential. Therefore, they have unrivalled moral authority to change the minds and hearts of key climate actors.

The Cascade Institute launched the Youth Climate Values Survey to create a fine-grained picture of the Canadian youth climate movement today. The survey feeds into the Institute's development of strategies for youth climate leaders to collaborate more effectively with one another and amplify their impact. The nation-wide survey asked young Canadians (ages 14-30) who identify as members of the youth climate movement to share: (1) their opinions about the most impactful climate actions and tactics, and (2) their core beliefs and values. And the results are in.

Participants reported affiliations with a whopping 158 unique organizations, associations, initiatives, and school clubs in our survey sample (n=127)—and we know this is only the tip of the iceberg. Despite their extensive engagement with climate organizations, most participants (58 percent) are unpaid for their contributions to climate action (or paid very little).

Young Canadians are pessimistic about meeting climate targets—but refuse to give up hope. 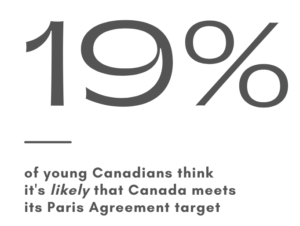 Only 19 percent of respondents thought it was likely (>50 percent confidence) that Canada meets its Paris Agreement target of reducing GHG emissions 40-45 percent below 2005 levels by 2030. Even looking a bit further into the future, just 23 percent of respondents believe that it is likely that Canada achieves net-zero emissions by 2050. This pessimism extends to the prospects of meeting global temperature targets. A strong majority of respondents believe that we are unlikely to limit global warming to 1.5 degrees (80 percent) or even 2 degrees (63 percent).

However, youth climate leaders refuse to give up hope completely. Only a small minority of respondents believe it is “extremely unlikely” that Canada achieves its 2030 and 2050 targets (15 percent and 10 percent, respectively).

Youth think they can bring about change through lobbying, pressuring, or persuading key actors.

Despite their pessimism about meeting climate targets, young Canadians remain focused on action. Our survey asked respondents to rank the top five most impactful climate action tactics for youth. Given the fact that most respondents were high school or post-secondary students, it is unsurprising that 72 percent of respondents selected “pursuing climate-related education or conducting research on climate change solutions” as one of their top five tactics. But close behind was “lobbying, pressuring, or persuading key actors,” which 70 percent of respondents selected as a top five tactic and 55 percent selected as their number one most impactful tactic for youth—more than any other tactic.

Governments continue to be the main target of youth climate action.

However, young Canadians are split on the importance of financial actors like banks, insurance companies, and institutional investors for addressing the climate crisis. Only 55 percent of participants selected financial actors in their top five and just 5 percent ranked it number one.

Youth are ready to move on from fossil fuels.

While actions that address both the supply of and demand for fossil fuels and other carbon intensive activities are required to solve the climate crisis, young Canadians tend to focus on the supply-side of the equation. 66 percent of respondents selected “preventing the construction of new pipelines and other fossil fuel infrastructure” as one of their top five climate actions, while 57 percent selected “decreasing or eliminating investment in the fossil fuel sector.”

These preliminary results provide a glimpse into the hearts and minds of the Canadian youth climate movement. This study is ongoing, and we are currently assessing to extent to which ideological commitments are related to climate action priorities, actions, and tactics. We are also analyzing the responses to questions on a wide range of other topics, including youth attitudes about the relationship between climate action and systemic inequality, technological solutions to climate change, the role of capitalism in driving green innovation, and youth attitudes about financial actors.

Coming January 2022: Findings and insights from the study will be published in an Insight Report. Comparative analysis between other key climate stakeholders will continue in 2022.