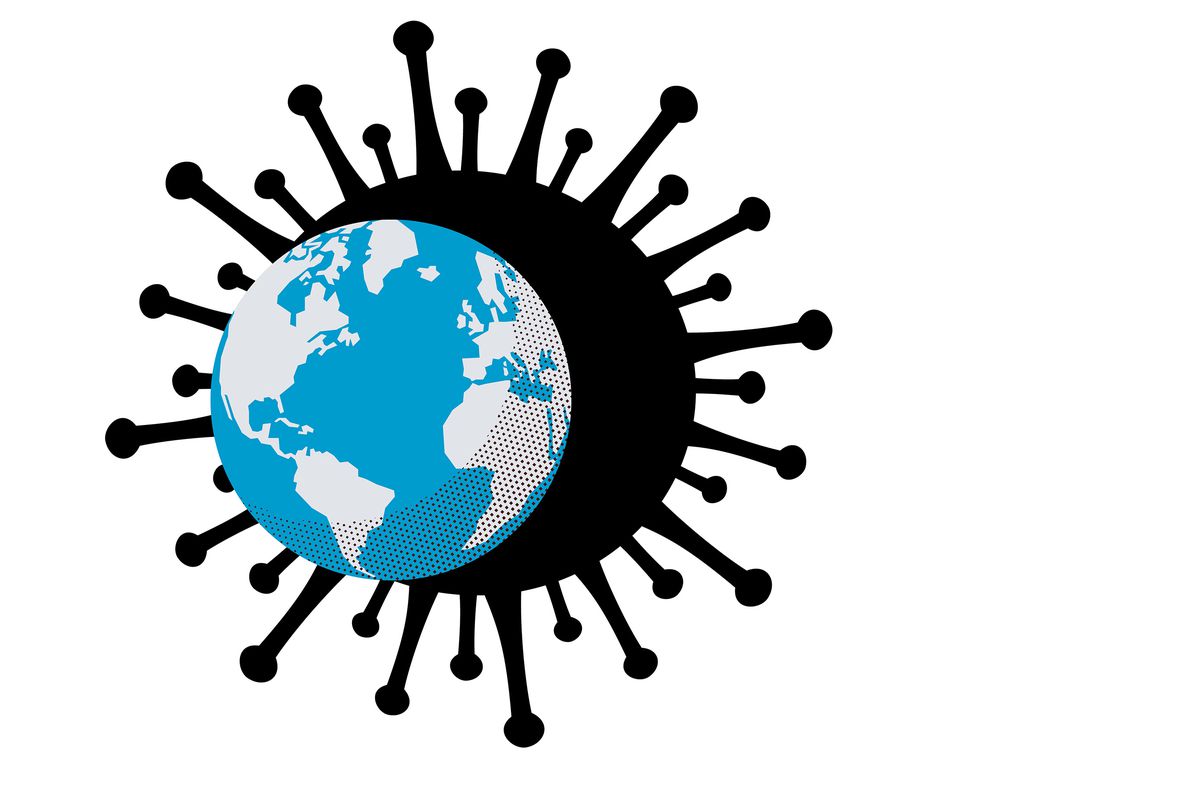 What a difference seven days make. Shopping for groceries at a big box store near Victoria during the last week of February, I found nothing amiss. Shelves were well-stocked, people’s carts contained the regular assortment of necessities and goodies, and everyone seemed to be happily going about their daily lives.

A week later, I stood in front of the same shelves, expecting to find them filled with the usual staples – flour, pulses, sugar and the like. But they’d been stripped bare. Now, shopping carts were groaning under giant bags of potatoes, stacks of packages of frozen chicken and large jugs of water. People kept their distance from each other in the aisles. No one was smiling.

Four days earlier, news had broken that the novel coronavirus had been spreading undetected for six weeks in King County in Washington State, just spitting distance across the water from Vancouver Island. Suddenly, what had seemed to be a remote problem was right in our back yard. And people rushed to prepare.

The coronavirus emergency is going to manifest itself in these kinds of micro-details in our day-to-day lives – in bare shelves, anxious conversation with friends, and the trials of juggling life’s essential tasks and making ends meet when workplaces and schools are closed. But we should also take some time to see the larger picture, because this global health crisis is revealing critical vulnerabilities in humanity’s planet-spanning economic, social and technological systems.

This larger picture is mostly painted in dark hues, but there are also some surprising silver linings around the coronavirus clouds swirling on our horizon.

What’s happening in response to the worldwide spread of the SARS CoV-2 virus (and COVID-19, the disease it causes) is a vivid example of a global “tipping event,” in which multiple social systems flip simultaneously to a distinctly new state.

The most recent event of this kind was the 2008-09 financial crisis. It marked an abrupt shift in the world economy from a state of relatively high growth and modest inflation to a state of much lower growth flirting with deflation. The world economy has never returned to its pre-2008 state.

The relatively new science of complex systems shows that such tipping events are made more likely by the unprecedented connectivity in the networks that humanity has laid down in a dense web across Earth’s surface – air traffic, financial, energy, manufacturing, food distribution, shipping and communication networks, to name just a few.

This science also shows that until we manage this connectivity better – which could mean, among other changes, reducing our international travel, simplifying global supply chains and bringing some production processes closer to home – we’re likely to experience more frequent tipping events of ever-higher destructive force.

The new coronavirus has properties that make it an especially powerful tipping agent. Most of us know the basic statistics: About 80 per cent of visibly infected people develop relatively mild symptoms; some 15 per cent become seriously ill; 5 per cent critically ill; and (according to the latest World Health Organization numbers) slightly more than 3 per cent die. This reported mortality rate will probably decline as specialists get better at counting infected people with mild or no symptoms.

But here are some less-recognized facts: The incubation period of this coronavirus is usually under two weeks, but data from China indicate it sometimes extends over three weeks. Infected people with no symptoms can transmit the disease. The virus appears to be present in at least some infected people’s saliva, urine and feces.

Perhaps most important, in the people with mild symptoms, COVID-19 often mimics everyday respiratory infections such as the common cold or the flu. This coronavirus is a stealth bug. Its relatively low lethality makes it more dangerous, not less, because it makes identifying carriers harder, giving them more opportunities to spread the virus.

To estimate the disease’s potential impact, let’s be conservative and cut the proportion of humanity infected to 30 per cent and the coronavirus’s lethality from 3 per cent to 0.5 per cent. In a world population of nearly 7.8 billion, these perhaps optimistic assumptions still produce an estimate of nearly 12 million deaths worldwide.

If, instead, we use a 3-per-cent lethality rate and the experts’ attack rate of about two-thirds, the estimate rises to more than 150 million. So it’s entirely reasonable to say that tens of millions of people could die from this disease and – not to be overlooked – hundreds of millions could become seriously ill.

The attack rate might be substantially lowered if many countries impose draconian measures to contain the disease: shutting down transportation networks; banning large gatherings; closing schools, universities, and factories; and rounding up all suspected carriers or forcing them to self-quarantine.

But such measures carry their own immense costs, especially in a world economy that depends on constant, high rates of consumption. China may be containing the spread of the virus, but the government has had to turn off parts of the economy to do so. Even if COVID-19 doesn’t kill you, notes Paul Krugman, the Nobel Prize winning economist, “it might kill your job.”

The new coronavirus is also likely spreading fast in parts of the world – South and Southwest Asia, north and sub-Saharan Africa, and parts of Latin America – that are saddled with governments of limited competency and resources, poor public-health infrastructures, and severely compromised urban water and sanitation systems.

We don’t know what’s happening in many of these regions. They’re literally blank spaces on the global coronavirus incidence map, because health agencies there often lack capacity to detect the disease.

At the beginning of February, just two labs in the entire continent of Africa, home to 1.2 billion people, could test for this virus. While the situation is better now – in recent weeks, the World Health Organization has dispatched testing kits to dozens of African countries – it’s fair to say that more than half the human population will face this illness with little or no advanced medical help.

These regions also risk becoming “epidemiological pumps” – vast reservoirs of the disease that reintroduce it regularly, in mutated form, into parts of the world that might have otherwise brought it under some control.

When we look at this larger picture, we see a striking reality: The SARS CoV-2 virus seems well-tuned to exploit the specific characteristics of the world we’ve created for ourselves – with our massive population tightly linked together by air travel, exotic tourist excursions and just-in-time supply chains, and marked by brutal inequalities in health care and physical well-being.

Taken together, humanity is now among the largest bodies of genetically identical, multicellular biomass on Earth; all told, we weigh nearly a third of a billion tonnes. Combined with our proximity in huge cities and our constant travel back and forth around the globe, we’re now an enormous petri dish brimming with nutrients for cultivating new diseases.

Complexity scientists aren’t surprised by this kind of precisely tuned exploitation – it’s exactly what one should expect in constantly evolving living systems. New viruses survive or fail by Darwinian logic. In recent years, countless viral mutations have certainly arisen and then vanished without a trace, because they weren’t “fit” enough to survive – that is, they couldn’t successfully reproduce in the specific world we’ve created.

But now SARS CoV-2 may have our number.

Two key factors – high connectivity and high uniformity – make up this number, and together they leave us increasingly vulnerable to global tipping events. First, we all know that compared to, say, 50 years ago, connectivity between people, groups, technologies, organizations and companies around the world has soared not just through flows of information – phone calls, text messages, torrent downloads, financial transfers and the like – but also through flows of materials, energy, goods and people themselves.

But we’ve paid less attention to the rising uniformity of our species’ institutions, practices, technologies and ideas. Nearly everywhere in the world, for example, national economic systems, including central banks, ministries of finance, and the like, now have similar designs.

Financial instruments such as stocks, bonds and their derivatives are similar nearly everywhere, too, as are computer hardware and software, social-media platforms, antibiotics, core industrial processes, germplasm for essential crops and livestock (including humanity’s 22 billion chickens, 1.2 billion sheep and 1.5 billion cattle), fast-food restaurants, clothing, dominant political ideologies, languages of commerce, consumerist notions of the good life and even blockbuster movies.

Research shows that high connectivity and high uniformity can combine to make large systems – such as our global financial, energy, food and information systems – far more susceptible to rapidly cascading change, in which shocks propagate like a row of dominoes falling over.

A research team I led has also found that this combination boosts the risk of synchronized crises across normally independent systems. Between January and June of 2008, for instance, as the U.S. sub-prime mortgage crisis was reaching its climax, world energy prices soared – the international price of light crude oil rose more than 60 per cent to more than US$140 a barrel – and the price of grain worldwide shot upward, too, triggering food riots and violence in dozens of poor countries. Our analysis shows that these three crises were intimately linked.

In the current coronavirus crisis, dominoes may soon start falling in major financial systems, especially in the heavily indebted Chinese economy, as the downturn caused by the pandemic drives up the proportion of non-performing loans.

But cascading changes in our global social systems don’t always have to be so pernicious. Some might be virtuous, and it’s here where we can glimpse those silver linings.

Today’s emerging pandemic could help catalyze an urgently needed tipping event in humanity’s collective moral values, priorities and sense of self and community. It could remind us of our common fate on a small, crowded planet with dwindling resources and fraying natural systems.

We won’t address this challenge effectively if we retreat into our tribal identities and try to wall ourselves off from each other. COVID-19 is a collective problem that requires global collective action – just like climate change.

As with climate change, we need the best science we can muster. While humanity waits on tenterhooks for treatments and vaccines, we need to rebuild our collective trust in scientists, the scientific method and scientific findings.

So, I place my own hope in the possibility of virtuous cascades of such positive, “normative” change. The coronavirus emergency is already causing terrible human suffering. But it’s also just possible that it could put us, together, on a far better path into the future.