The Version of Record of this op-ed has been published in The Ottawa Citizen.

This time, 'Mutual Assured Destruction' might not work. The Russian leader has already shown extreme irrationality in his calamitous choice to start this war. 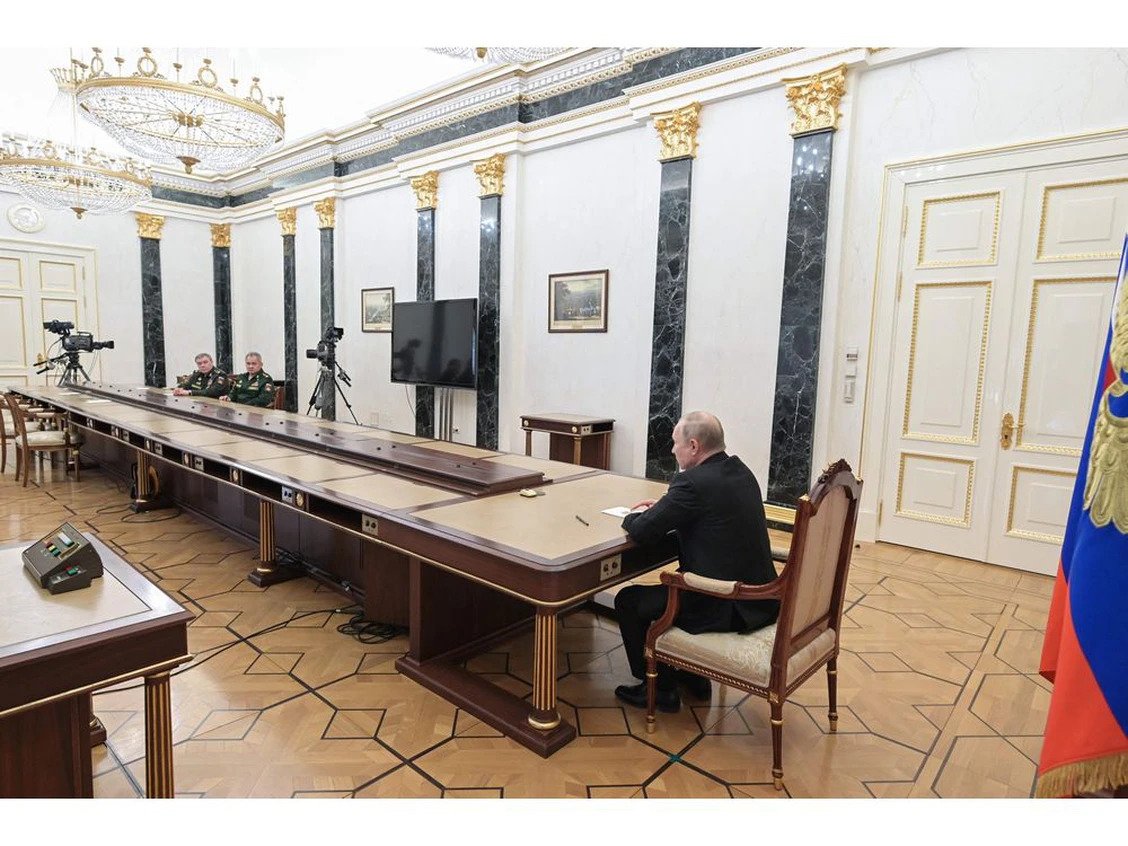 Ponder, for a moment, the words of Dmitry Kiselyov, the host of Russia 1 television’s flagship news program on Sunday, Feb. 27, the day after Western countries decided to implement sweeping sanctions on Russia’s banks.

“Our submarines are capable of launching over 500 nuclear warheads, which guarantees the destruction of the U.S. and all NATO countries,” Kiselyov said, as file images of Russian strategic missile submarines heading to sea played behind him. “The principle is: Why do we need a world, if Russia is not in it?”

Kiselyov is an infamous Russian propagandist who’s often called “Putin’s mouthpiece.” So his words undoubtedly reflect the sentiments of Russian President Vladimir Putin, a man who sees himself as the symbolic embodiment of the Russian nation. Putin was telling the world, through Kiselyov, that if he goes down, he’ll take the world with him.

Russia’s attack on Ukraine is a frontal assault on democracy, and all who treasure democracy should rally to Ukraine’s defence. But in the West’s response to Russia, our collective righteousness risks outstripping common sense. We can be morally justified in every measure we take to answer Russia’s invasion and yet still be utterly stupid in our actions overall, if they’re not calibrated to avoid devastating consequences.

I began university in the 1970s with the goal of understanding war — why it happens and how it can be prevented — and I’ve dedicated much of my research career since then to this project. My assessment of Putin’s psychological state leads me to believe that the current situation is more dangerous than the Cuban Missile Crisis in October 1962. Nikita Khrushchev, the Soviet Union’s leader at the time, was a model of sanity by the standards of Russia’s current leader.

Analysts around the world are desperately trying to divine what’s going on in Putin’s mind. They’ve largely ascertained, I believe, his motives for the attack: with regards to Ukraine specifically, Putin wants to stop the development of a vigorous, Europe-facing democracy on Russia’s doorstep — especially in a “brotherly” Slavic nation — because it would pose a mortal threat to his rule’s legitimacy; more generally, he wants to seize back Russia’s previous status as a superpower by neutering NATO and re-establishing Russia’s old imperium.

But it’s much harder to assess the man’s deeper mental state. In recent days, I’ve heard experts suggest that Putin has the psychological profile of a megalomaniac; that his exceptionally high fear threshold makes him insensitive to hurting people; and that his hyper-aggressivity may be a function of heavy steroid consumption.

We can be morally justified in every measure we take to answer Russia’s invasion and yet still be utterly stupid in our actions overall, if they’re not calibrated to avoid devastating consequences.

These hypotheses, while plausible, are in the end little more than speculations. But we don’t need to speculate about Putin’s public performances. And one image from those performances keeps flashing in my mind: the man sitting at one end of a long table, five or more metres from his defence minister and security advisers. That’s not just odd behaviour; it’s scarily weird. Maybe he’s trying to avoid exposure to COVID, but we can’t escape the implication that Putin believes he’s surrounded by threats — that he has become, in short, deeply paranoid.

Now reality is reaching down that table and grabbing Putin by the throat. Ukraine has radically changed since Russia’s last military engagement with the country, after the 2014 Maidan Revolution. Its army is no longer decrepit, and its population is largely united in fiercely opposing Russian aggression, with hundreds of thousands of citizens arming themselves to defend homes, families and democracy.

Russian forces are far too small to “demilitarize” and “deNazify” Ukraine — the two war aims Putin announced as the invasion began. Achieving those aims, ludicrous though the second one is, will require occupying the country over an extended period. Yet Russia’s entire military force is probably less than half of what it needs to fully occupy the country, assuming widespread armed resistance. Its forces are also too small to sustain heavy losses in bloody street-by-street combat in Ukraine’s cities. When Putin finds he can’t enter and hold key cities — if his previous war tactics in the Caucuses and Syria are any guide — he’ll level them with artillery, rockets and bombs.

Putin’s two war aims may be unachievable, but if he persists in pursuing them, he’ll effectively lock himself into escalation. His aims are maximalist, so they don’t provide for any partial solution to the crisis. He must either completely subjugate Ukraine or completely lose face.

So this is the situation the West faces: we have a paranoid man backing himself into a corner and pointing a gun (in the form of 1,458 deployed strategic nuclear warheads) at our chest. Of course, the West’s nuclear-armed countries are pointing a gun at Russia’s chest too. Conventional wisdom holds that Putin will be deterred from pulling his trigger by the prospect of his own country’s destruction. As in the Cold War, we’re once again putting enormous faith in the deterrence effect of mutual assured destruction — the “MAD” doctrine we all thought was safely buried in the past.

But there are strong indications that MAD won’t work now. The Russian leader has already shown extreme irrationality in his calamitous choice to start this war. And recall Kiselyov’s chilling words: “Why do we need a world, if Russia won’t be in it?” If Putin does regard himself as the embodiment of Russia, and if he believes the West is already intent on destroying him, then there may be little to stay his hand. Nuclear deterrence could easily fail. As the renowned national security expert and Putin biographer Fiona Hill says: “Putin is increasingly operating emotionally and likely to use all the weapons at his disposal, including nuclear ones.”

To lower the probability that Putin will pull the trigger, the West needs to do two things, and fast. First, we should immediately and publicly declare that we’re not pursuing regime change in Moscow. We should also declare that our sole aim is to get Russian forces to halt their invasion and withdraw from Ukraine, and that, if these things happen, all sanctions will be promptly lifted. Statements like the one made recently by U.S. Sen. Lindsey Graham, in which he encouraged Russians to assassinate Putin, are idiocy. Putin’s propagandists have already widely exploited Graham’s words in Russia’s state-controlled media.

Second, as much as possible, the West must avoid the appearance of moral piling on. Far too often over the past 10 days, our collective behaviour — not just that of our leaders, but also of the general public, particularly on social media — has resembled a global exercise in the mob shaming or cancelling of Russia. The West must supply as many weapons as possible to Ukraine’s forces as quickly as possible, but we should do it as quietly as possible. When Sweden’s prime minister announced that her previously neutral country would send thousands of anti-tank missiles to Ukraine, she was performing for domestic and international audiences. The performance was both tactically unnecessary (in that it didn’t substantially aid Ukrainian military efforts on the ground) and strategically dangerous (in that it only further reinforced Putin’s paranoia).

These two actions could help ensure that our declared war aims don’t lock us into escalation, too. But they won’t be popular, which means they’ll be hard for Western democracies to implement. Most of us in the West are angry. We’re rooting for the incredibly brave underdog. We want public punishment of Putin and, too often, of Russians more generally, forgetting that Russians everywhere are also victims of this madness.

These emotional reactions are understandable. The current war, after all, is about as close to a battle between good and evil as one ever sees. But if we don’t better calibrate our responses to Russia, our outrage may ultimately contribute to the deaths of hundreds of millions of people. The democracies of the world have shown unexpected unity and resolve. Now they urgently need to be smarter.

Read Article in the Ottawa Citizen