In just a decade, the idea of keeping fossil fuels in the ground went from a fringe slogan to the mainstream. Now, as the pandemic rolls on, we are approaching a tipping point for permanently constraining fossil fuels.

The COVID-19 pandemic and government response have created an unpredictable and volatile economic environment, particularly for the oil industry. Oil demand initially fell by a system-shocking 30 percent, setting the industry on its heels. But pandemic-era recovery spending plans have sought to salvage the sector, providing much greater support to fossil fuels than to clean energy—a reminder that while the oil industry has faced unprecedented disruption, it remains extremely powerful.

This pandemic-induced volatility came at a moment when political and financial movements to “keep it in the ground” (KIIG) have reached the mainstream. Now it feels like these movements are on the brink of triggering a historic tipping. The decision to divest from fossil fuels—where institutions like universities, pension funds, or churches sell off their fossil fuel investments—continue to be made by high profile organizations like the University of Oxford and the New York State pension fund. Pipeline projects are becoming “unbuildable,” with two major North American projects delayed and a third cancelled within a span of 24 hours in July this year. Even more telling, major oil companies (British Petroleum and Shell) are acknowledging that the end of growth in oil demand is here—or is very near—and as a result, they have downgraded the value of their oil assets by a combined $28 to $39 billion.

But is it wishful thinking to believe that we are really on the cusp of historic, nonlinear change? In a recent study, we show that the momentum—and the opportunity—for systemic change has never been greater.

In a recent article in Climatic Change, we document the history of the political and financial KIIG movements and outline the key factors that drive progress and make a rapid tipping event more likely. The KIIG movement has been engaged in an expectations game based on a simple feedback cycle: growing expectations of keeping fossil fuels in the ground lead to commitments that align with that expectation—and those commitments further embolden those expectations.

This cycle plays out in a competition between alternative visions of the future, like the competition between VHS and Beta-max video formats—or Facebook and Myspace social media platforms. When actors commit to one of two competing choices—like selling only VHS or creating an account on Facebook—other actors respond by amending their expectations and commitments (buying a VHS player or migrating to Facebook). In this kind of signalling process, when a critical mass aligns behind one of the options, consolidation tends to snowball.

We now face a similar (though much more dire) competition between two visions of the future: either fossil fuels are kept in the ground and warming is kept below 2°C or the majority of profitable fossil reserves are extracted. As early as a decade ago, the world was firmly in the “burn as much as is profitable” camp. But momentum for the alternative vision has built in waves, with each wave of change exponentially larger than the one before it. The balance will tip when a critical mass of commitments is made to a below-2°C world and forces markets and society to amend their expectations (just as everyone eventually gave up on Beta-max and Myspace).

The rise of a movement to restrain fossil fuel supply

In the study, we track how that momentum grew over a decade, beginning around 2010.

Early political and financial proponents of keeping fossil fuels in the ground were aware of this expectation game, at least implicitly. The financial advocacy firm, Carbon Tracker Initiative, began convincing investors to bet on a carbon-constrained future based on the recently established need to keep most fossil fuel reserves buried to stay within 2°C of warming. Their approach inspired activists including Bill McKibben and Naomi Klein to throw their weight behind protests and divestment against fossil fuel “enemies.” As Klein put it, a carbon-constrained future lacked credibility, but these campaigns could create facts on the ground that would change that. That was nearly a decade ago.

Since then, commitments to a carbon-constrained future entered the mainstream. At first, the financial community derided Carbon Tracker Initiative’s position on stranded assets. But cracks began to show as key figures like the high-profile UK economist Nicholas Stern validated the “carbon bubble” concept. Protests against the Keystone XL pipeline and divestment were also largely dismissed as symbolic actions. But by the 2015 Paris Climate negotiations, the idea of grounded reserves began penetrating the mainstream. The Rockefeller Brothers Fund, for instance, made $50 million in new divestment commitments, Mark Carney of the Bank of England urged investors to ostensibly deflate the carbon bubble before it popped, and President Obama cancelled the Keystone XL pipeline noting the need to keep some fossil fuels buried.

Since 2015, those developments led to even more mainstream commitments. In finance, the scope of new commitments grew from stock sell-offs to insurance companies and lenders cutting their business ties with coal and heavy oil. In North America, pipeline protests also proliferated to contest nearly every proposed project, creating a de facto commitment to a pipeline moratorium. These historic pipeline protests at the Standing Rock reservation radicalized activists and awakened indigenous resistance across North America (it even inspired Alexandria Ocasio-Cortez to run for congress). Divestments also grew across 1,200 institutions that manage $14 trillion in assets, including many of the world’s largest pension and sovereign wealth funds. Finally, national governments are now enacting moratoriums on new oil development, led by Costa Rica, France, Belize, Denmark, New Zealand, and Ireland; we appear to be in the midst of a rising wave of state-level bans.

Change hasn’t let up in 2020. The year opened with Blackrock vowing to walk away from unsustainable fossil fuel investments; then in February, less than a week after being identified by Bill McKibben as the world’s largest lender to expansionary fossil fuel developments, JP Morgan Chase joined most other big US banks and pledged to phase out loans to Arctic drilling and coal mining, asserting that the “climate crisis presents financial and reputational risks that just can’t be ignored.”

A short decade after so many laughed off movements to constrain fossil fuel extraction, these campaigns have led to commitments that are now forcing financial and political leaders to take seriously the expectation that fossil fuel will be kept in the ground. 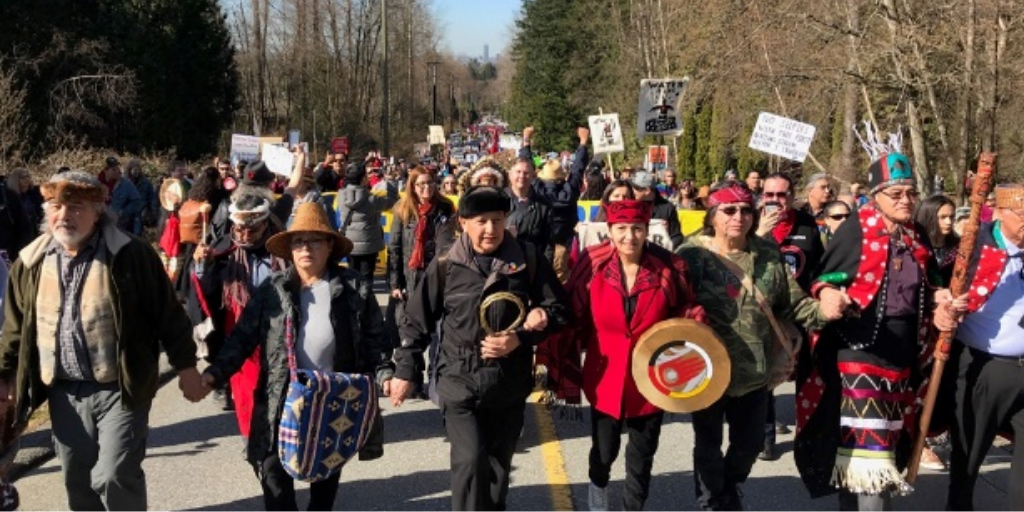 The pandemic as tipping point catalyst

Enter the pandemic—and suddenly, we are in a moment when critical decisions are being made that will determine when peak oil demand will happen. There have been some encouraging signs. Expected areas of demand growth like jet fuel have been set back in ways that make a rebound in demand slow and uncertain. And while road transport demand has rebounded quickly, the fate of gasoline demand is also uncertain as many cities in Europe and China have responded to the pandemic by sidelining automobiles and accelerating electrification.

To see the sweep of change and the impact of peak demand, it is helpful to contrast British Petroleum and Shell’s recent announcements on peak demand with their previously published expectations for growth. As shown in Figure 1, in 2013 they were projecting fossil emissions growth for two decades, which they knew would breach the IPCC carbon budget for 1.5°C around 2025 and the budget for 2°C around 2040. Their 2018 projections moved significantly closer to the IPCC scenario for 2°C, though both companies argued that impacts on the oil industry would be minimal within their 20-year business-planning horizon. But in 2020, they are finally admitting that their expectations—and consequently, the expectations of the finance industry--are shifting radically right now. 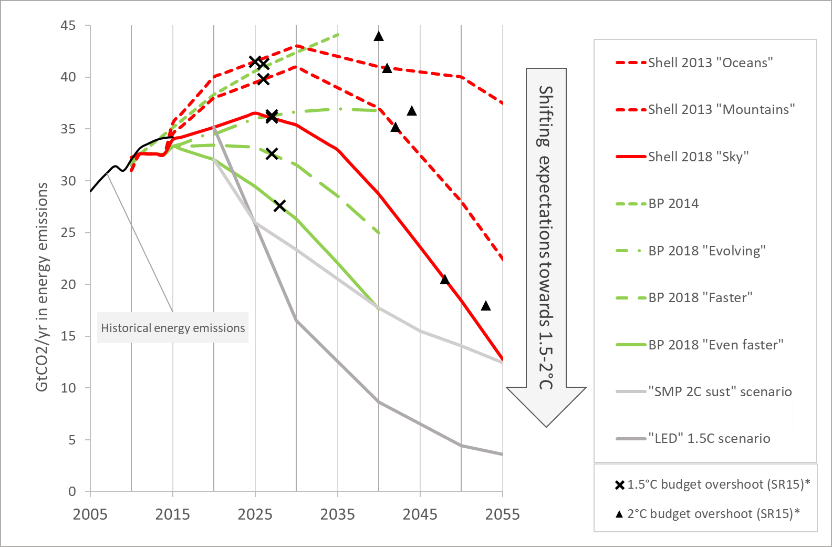 A fossil fuel death spiral ahead?

We can glean a sense of the scope of the fallout from peak demand in oil from the case of coal. The accelerated collapse of coal in many countries during the pandemic suggests that such a peak in demand could set off an accelerating decline—evocatively referred to as a “death spiral.” Peak demand creates financial weakness and political weakness when demand fails to keep growing as expected, which opens the door to further weakening, especially when activists escalate their pressure on the coal or oil industry.

We can already see the financial consequences of the oil industry’s devotion to growth at this moment. After years of US shale-oil debts piling up, the bill is coming due. Oil companies that have paid dividends beyond their earnings to keep investors from fleeing can no longer do so. And the bets on growth are expected to continue souring as electrification projects keep eating into oil demand. In China alone, electric buses, mopeds and bikes displace almost a million barrels of oil demand per day (~1% of global demand). This should serve as a warning to those who are still attached to the fossil fuel past—they risk being stranded in the fallout if they do not align with a future in which warming is kept below 1.5 to 2°C.

As the tilt of recovery funding towards fossil fuels suggests, it is too early to count out the power of the oil industry, no matter how close we may be to a tipping point. But the pressure to keep fossil fuels in the ground from climate justice campaigns and within the financial community has finally brought a carbon-constrained future into focus. Now, if governments and financial systems—pushed by activists—act to reinforce those expectations as we exit the pandemic, we might just keep enough oil in the ground to safeguard the climate.

1 thought on “Keeping fossil fuels in the ground: How a once fringe idea came to redefine our energy future”